Is travelling as simple as A to B?

What we mean by low carbon transport 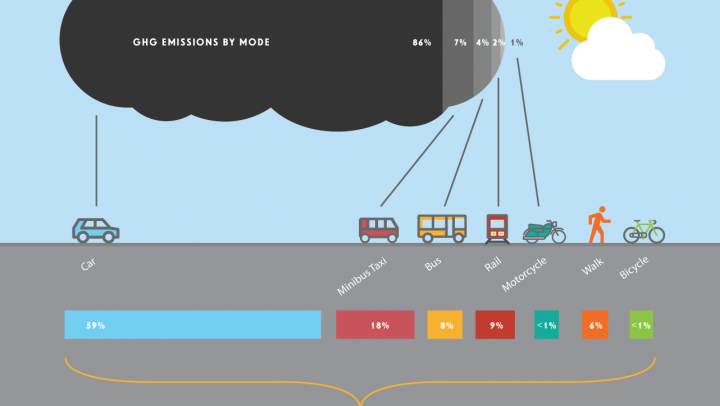 Transport contributes to climate change to varying degrees. So, in an ever-moving world, it’s wise to consider how we get around. But, as it was highlighted in our first policy brief, why and when are just as important.

We get a more accurate picture of energy efficiency when we look at passenger movement instead of vehicle movement. For example, on the surface, an electric car is more efficient than a petrol minibus taxi. But it carries less passengers – on average only 1.4 – so is it? Rail is the least energy-intense mode as a single train can carry hundreds. Meanwhile, walking and cycling are the most energy efficient because they use no fossil fuels directly.

The energy efficiency of a walking and cycling stays constant. But minibus taxis and trains get more efficient at rush hour, when they are full to bursting. However, in terms of morning and evening travel, high-income groups have a modal mix dominated by car use. Conversely, low- and middle-income groups rely on public and non-motorised transport, and tend to use many different modes.

These are significant times of day to analyse as most people in Cape Town travel to get to work (22%) or school (13%) and home (48%). Furthermore, thinking across gender lines reveals interesting differences in how men and women are moving to work. The latter use the less energy-intensive bus and minibus taxi modes in greater numbers.

Beyond rush hour, it gets even more complex. People make trips for shopping, recreation, visiting, fuel and much more. And they do these in all kinds of ways.

Putting together all the information we know helps us arrive at a picture of Cape Town’s movement patterns, and how much carbon passenger transport emits. The bottom line is this: although car use accounts for less than two thirds of the total passenger kilometres in the city, it accounts for over 85% of its emissions.

In analysing several different transport scenarios for Cape Town, Sustainable Energy Africa tried to determine what we need to do to reduce emissions from passenger transport by 10%. It concluded that increasing car occupancy (by, for example, carpooling) would deliver the best results, for the least change in behaviour. Increasing public transport use would, of course, also offer emissions reduction benefits. But to compete against the car, investment in this area by the likes of Prasa needs to match the demand.

To find out more about these and other scenarios, have a look at the policy brief.