On January 30, 2014 the Open Streets team in Cape Town convened a group of 25 individuals including Seapoint and Greenpoint residents and others interested in the series of Open Streets days in 2014

The group met in front of the Seapoint library and made their way down to the promenade where the walk continued and 80 minutes later ended at the beach.

As usual, it was an informal and organic meander where everyone had a chance to participate by raising questions or providing ideas. At some point even a group of young skateboarders joined and expressed their strong position to shut down Beach Road so they could skate safely.

The group identified opportunities and challenges in planning Open Streets on Beach Rd. In the first instance, closing down the street to traffic was perceived as a way to counter the car dominated vibe of this street which contrasts with the people-friendly promenade; or as one of the participants put it Beach Rd is a barrier separating residents from public space. Open Streets would be an opportunity to showcase different uses of the street when cars are taken out and could ultimately help enhance the space. It would increase safety for children spilling over from the promenade onto the street and would help build the Open Streets network envisioned to cover a large part of Cape Town by promoting linkages amongst different communities and helping to ease tensions between local residents and outsiders.

On the other hand one of the residents highlighted concerns about closing down a major transport artery and the inconvenience this would create to those living in the area. With the large amount of open space already available in this area, one participant noted it seems unnecessary to also take over the street. Moreover, lack of businesses on Beach Rd reduces the likelihood of activity and others were concerned about the security challenges such an event would pose.

All those challenges are real and ultimately, Open Streets can only take hold in a community where residents actively participate and own the programme. The group agreed that identifying other groups as well as potential spaces to spread the Open Streets philosophy would be the next steps. One participant suggested we explore the area around the stadium where public space is not only underutilised but also in the process of being transformed without proper public participation; another wanted to revive the idea of a block party and others were keen to start talking about alternative streets for an Open Streets day. The walk came to an end but the conversation about rolling Open Streets in Seapoint/Greenpoint was only getting started. 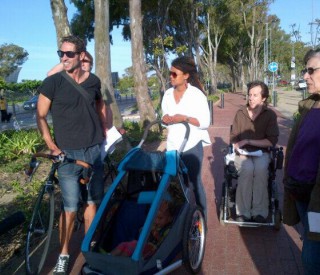 There are ongoing discussions with the City of Cape Town about testing the concept of Open Streets on Beach Road and we want your input.
Read more