Sunday 23 June, 2013 will go down in the history of Salt River not just as a beautiful winter day but as the day in which local residents and the Open Streets working group along with friends walked along Malta Road discussing how to improve this fascinating street and thus planting the seed for an Open Streets day in Salt River.

Talking Streets on Malta Road highlighted diversity both among those who inhabit that area as well as those who are attracted to it. Indeed, the group was made up by the Chair person for the Salt River Residents Association, a couple of business owners, residents of nearby Woodstock and Obs, a researcher from UCT, a theatre development expert, a historian, a French urban designer, a salsa dancer, a couple of cyclists and skateboarders and of course the Open Streets working group.

Diversity was also palpable in the issues that came up in the discussion and the principle of long-term impact by Open Streets was heard loudly amongst all participants.  Ranging from high level of homelessness in the area to the lack of trees and pedestrian crossings on the street, it quickly became clear Open Streets must be designed from a very different perspective vis-à-vis the experience in Obs.

Street furniture was discussed as a way to beautify the street and bring some colour, life and a sense of safety; not only in the sense of creating living rooms as displayed on Lower Main Road on 25 May but in the structuring of permanent living spaces. In that vein, Malta Road provided several examples where infrastructure needs to be well thought out. As highlighted by one of the residents, furniture material, design and location must respond to the issues of crime, homelessness and others in the area. Similarly, it was clear that building infrastructure is not always the best response to needs in the neighborhood. For instance, in lieu of a traffic light, residents pointed to the scholar patrol helping children cross the street near the train station. This role, in addition to providing safety, can serve as a crime deterrent and highlights the potential for job creation on the street. The conclusion here was that communities do not always need to wait for the City to build or create new things but that answers exist within.

Open Streets is no different; the initiative must be designed and managed by residents; and so when one of the participants raised the question who is Open Streets Malta Road for the answer was simple: for its residents and as one of the residents highlighted for the neighborhood to shine. Although challenges in terms of parking, getting some businesses to close down (i.e. panel beaters), getting the right level of law enforcement and trading were confirmed as real issues, it was also clear that Salt River residents are prepared to be imaginative about what Open Streets could look like on Malta Road.

From introducing the concept to locals with short-term Open Streets interventions in the next few months to creating a Pan-African food tour on Open Streets Day, the network began to develop in front of our eyes. The taste of Open Streets on Malta Road will clearly be one in its kind and will help continue flavouring the movement that seems to have not limit in the imagination of Cape Town residents. For the time being, Open Streets will continue to consult closely with residents of Salt River to ensure the ingredients are right and that on the day, the recipe is followed to deliver the best taste of Open Streets Cape Town is yet to experience. 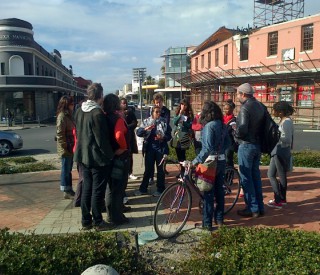