MEDIA RELEASE: Street Indaba: when streets are safe for children, they're safe for everyone

Streets in Cape Town are hostile to children, filled with risks and danger. What can adults do to turn them into safe, inclusive places? 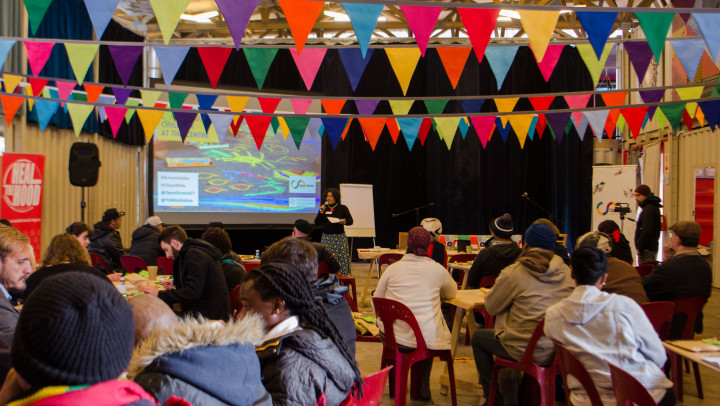 Streets in Cape Town are hostile to children, filled with risks and danger. What can adults do to turn them into safe, inclusive places? This was the central theme at the first Street Indaba hosted by Open Streets at Guga S’Thebe in Langa on 19 September. The event, which was themed Placing Children at the Centre, focused on how children experience the streets in our cities, and what responses were required to improve that. After all, said one participant, when streets are safe for children, they are safe for everyone.

To set the scene, the programme kicked off with recordings of young presenters at RX Radio - a radio station based at the Red Cross Children’s Hospital - talking about how they encounter streets. Their reflections ranged from streets as places to connect with and meet friends, to places of perceived and real danger. “My first lesson was my grandmother telling me that if I walk on the street someone will take me from my family,” said Amirah. Another described how there are no flowers or trees in their neighbourhood.

“The issue of keeping children safe requires considerations at different levels, from the level of violence our children have to navigate, to how we can make our streets more beautiful. If we are to create streets as spaces of community, how can we make them more inclusive and more vibrant, where people, and especially children, feel they belong?” said Nina Callaghan of the Children’s Radio Foundation, who was master of ceremonies for the day.

Speaking as part of a panel discussion, Lesley Muller, one of the founders of the Hanover Park Walking Bus Project, raised an issue which affects many communities across Cape Town: gangsterism. Muller cited a recent shooting as a real example of how this deprives children of access to streets, public spaces and freedom to play. “Last night, an innocent child was on his bike in Hanover Park. He was shot six times. Cape Town is not a place to play,” said Muller.

The point about giving children a sense of belonging was also a recurring theme, as speakers and delegates raised the point that being in a gang offered children a sense of identity, belonging and of their place in their community. However, suggested Callaghan, “in the same way that gangsters leave tags to mark their territory, how can we enable children to claim their space in other ways?”

Kirti Zala, coordinator at A Protagonist in Every Child (aProCh), a community-based initiative in Ahmedabad, India, was the keynote speaker for the day. In her talk, she suggested that inviting children to participate in the design of their cities enables them to feel greater ownership. This participation may take a long time, in terms of process and also building trust, said Zala, but “when children are equal participants, they are able to reclaim their childhood.” Zala offered examples of aProCh’s projects, which included participatory planning workshops with children, and days when streets are closed to traffic but opened to people — a similar model to Open Streets Days in Cape Town. In one example, Zala showed images of children reimagining zebra crossings with bright yellow paint and big white flowers.

This was a poignant reminder of the realities of children in South African cities, where their imaginations are polluted with experiences of violence and trauma. As Muller said: “How do we get eight-year olds to paint flowers in spaces that have already been tagged by gangs?”

Siviwe Mbinda of Happy Feet Youth Project / iThuba Innovation Hub in Langa led a walk around some of the streets in Langa, sharing reflections on how children inhabit and experience these spaces. He said for many people, the priority is to find activities that “keep children off the streets. But it’s actually about making streets a safe environment for them.” Taking this approach could help to remove the fear of streets, said Mbinda. He added that it could act as a driver to ensure that streets are inclusive, safe public spaces where children can play, rather than places that they need to hide from.

Yolande Baker, Executive Director of ChildSafe South Africa, suggested that there was a need for civil society to pressure government, policy makers and funders to ensure they are accountable for keeping children safe. Baker described how ChildSafe sees first-hand how children are injured in society — in many cases as a result of traffic accidents. Speed is a primary cause in many accidents where children are injured or killed. At least, fifty children were killed on the streets in Cape Town last year, as a direct result of driver behaviour.

Participants agreed that there was a need to establish platforms to give children a chance to raise their voices about how they want to experience streets. Those platforms would be a way to apply collective pressure on city authorities and law-makers to act to make streets safer for children.

“The Street Indaba aimed to bring together those working to make streets child-friendly in our city, and we are blown away by the response. Open Streets Days are a platform for residents of all ages, and whole communities, to come together to think reimagine Cape Town’s streets as inclusive public spaces. We will take input from the Street Indaba as we continue to roll out the upcoming series of Open Streets Days, placing a more deliberate focus on giving children a bigger stage,” said Rebecca Campbell, Operations Manager of Open Streets. 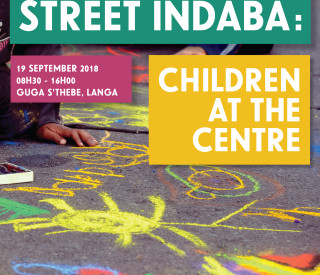