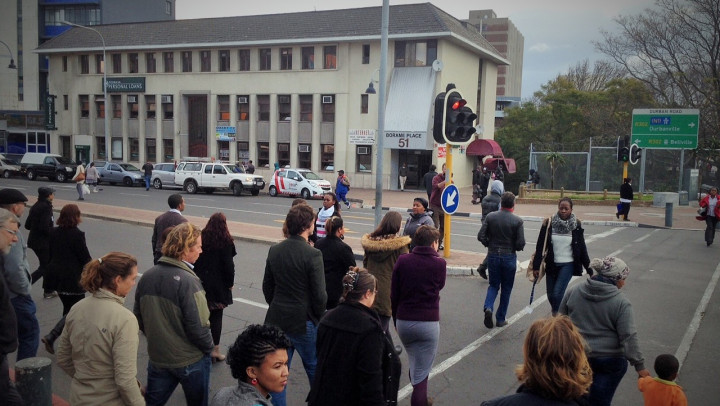 Make sure there is adequate public lighting

A dark street at night is a hot spot for crime, preventing people from walking there. That may be a perception in certain areas, but it is scarily true in others. Check out this IOL story about the relationship between bad lighting and violent crime in Khayelitsha.

Cape Town CBD is heading in the right direction with this one:

These all contribute to a more equitable streetscape.

If you’re afraid they’ll get knocked by a car, you’ll never let your child out the house. And if they never leave the house by themselves, they’ll never learn the joys of walking! Traffic calming measures encourage responsible driving, helping parents feel a bit more at ease.

Long streets are daunting for pedestrians. But if you partition them into chunks with landscaping that responds to human needs, you create an inviting space where people want to be. Nothing softens the facade of a giant building like a few person-sized trees and benches. A great example of this is the outdoor seating area at the Food Lovers Market in Hertzog Boulevard. This has broken up the journey to the MyCiTi Civic Centre station (and indeed the nearby car parks), bringing more footfall to the Foreshore.

Taking a whole lot of parking spaces out of a street at once never goes down well with motorists. But a city could go the Copenhagen route and remove 600 over 10 years (or one a week) from its city centre. This feels natural and doesn’t rock the boat. Some organisations have toyed with a similar idea in Cape Town by getting City permission to turn parking spaces into parklets. Like Open Streets Days, these give a glimpse of a different reality, but results have varied.

Take advantage of the outdoors

Outdoor cafes, public squares, and street performers attract thousands of people in summer. The question is: what do we do to increase walkability in winter, when Capetonians tend to hibernate?

A multi-zoned street with shops, restaurants, homes, public spaces and other public amenities makes for a contained, walkable space. Kalk Bay Main Road is a great example of this.

Place the main entrance of a building right on the sidewalk

There’s nothing worse than a sidewalk that gives way to a car park, creating a chasm between a person and a shopfront. There are plenty of examples of these across Cape Town’s suburbs: from your local strip mall to the petrol station forecourts in Green Point that break pedestrian flow along the Fan Walk. As silly as it sounds, you’re more likely to get into your car and drive across that car park to the store than go on foot. It makes more sense to place parking behind a building, or in the basement, and make the front door accessible to passers-by. Obviously, this is not possible with petrol stations (or desirable to their owners, rather). Interestingly, however, the petrol station on Kloof Street recently altered the layout of its forecourt so that its shop is now situated on the right and has easy access from the sidewalk.

Signage, signage, signage. A walking experience quickly gets frustrating if there’s no indication of where to go. Wayfinding takes the guesswork out of city navigation, creating confidence in pedestrians. This is an issue in Cape Town, where signage for motorists is abundant but walkers must rely on their own devices. The Transport and Urban Development Authority has helped address this in places where it's rolled out MyCiTi services. In Milnerton, for example, there is signage all over directing pedestrians to bus stations.

A populated business area is a better-lit business area. And as it’s a place with customers 24/7, businesses tend to cater for residents and open later. This, in turn, brings people out onto the streets for longer hours. Soon cars become redundant.

Providing bike lanes and a bike-share scheme, for example, will naturally lead to more walkable cities. This is because cyclists, at some point, always need to dismount and finish their journeys on foot. Up Cycles provides a bike-hire service that lets users explore the CBD and Atlantic Seaboard in this manner.

Cape Town’s St Georges Mall went car free for good in the early late 80s/early 90s. Since then, some surrounding streets have joined the party, giving walkers and cyclists priority. This arrangement provides the city centre with a walkable spine that connects from the Foreshore to Gardens.

As you might have picked up, many of these interventions are prevalent in Cape Town’s affluent areas. Our hope is that the whole city one day becomes more walkable and safe.