An idea that travels requires good guidance for smooth landing

The African Centre for Cities invited us to lead a brown bag lunch on 17 September, 2014. 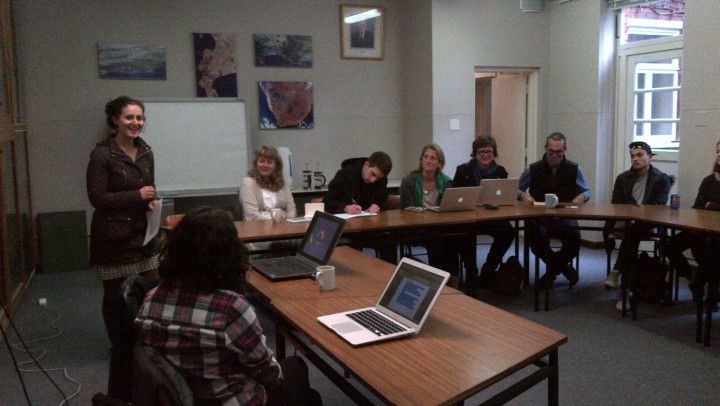 Diana and Marcela, both co-founders of Open Streets in Cape Town (with another co-founder, Lisa Kane, in the audience), shared the journey of Open Streets with an eclectic and animated group at the upper campus of UCT.  Following a short introduction by our host, Liza Cirolia, the discussion got underway. The format was simple: 20 minutes for a formal presentation followed by rounds of three questions at a time. At 2pm sharp the discussion was over.

The structure may have been straight-forward; yet the discussion was anything but that. After describing what an Open Streets day is like in relationship to the existing model born in Bogota and redefined over time by different cities, it was very clear to our audience that given the layers of complexity and wide diversity present in Cape Town, an Open Streets programme is not a matter of importing an existing model. It is in fact, a philosophy taking shape and being built collectively, which aims to serve as an open platform for broader urban transformation.

From the deeply embedded culture of car-ownership to weather patterns, Open Streets must take into account a wide range of traits that define this city and in many ways facilitates and challenges the development of a programme.

The main issues raised included linking up with neighbourhood initiatives, addressing the tension between a playful city and a market place city, truly enabling local economic opportunity, the danger of catering to the elites, the links with international programmes and the relationship with local government.

In linking with local initiatives; we pride ourselves in our deep engagement, especially with local residents, as we believe that is the most important part of this process. Nevertheless, we were reminded that the steps need to be well documented and we must find ways to utilize existing opportunities (like the upcoming Open Streets day in Kalk Bay/Muizenberg) to introduce new communities to the concept.

How the programme maintains its limits around the non-commercial, playful and light spirit is an issue we have discussed in light of the imminent need to produce a reliable financial model and ensure sustainability. And so the issue becomes how to challenge the status quo which is based on a heavily market orientated society. Along those lines, a conversation ensued around how we maintain a healthy balance between largely non-commercial activity and the maximisation of the space for the local economy to flourish. Admittedly we need to follow City policies while creating our own parameters in engaging traders, but as long as principles are clear the introduction of vendors as the programme grows (and as pointed out by a participant - the length increases) can be a very healthy addition to a city wide Open Streets day.

Finally and in many ways, most poignantly, the issue of how we create an inclusive space that invites everyone and tackles the syndrome of elitism in Cape Town was raised. No easy answers but many ideas were shared of how different parts of Cape Town can be involved and how Open Streets can slowly start to open the city.