A Foreshore for all

The northern edge of the Cape Town CBD represents a hopefully bygone era of car-first development. 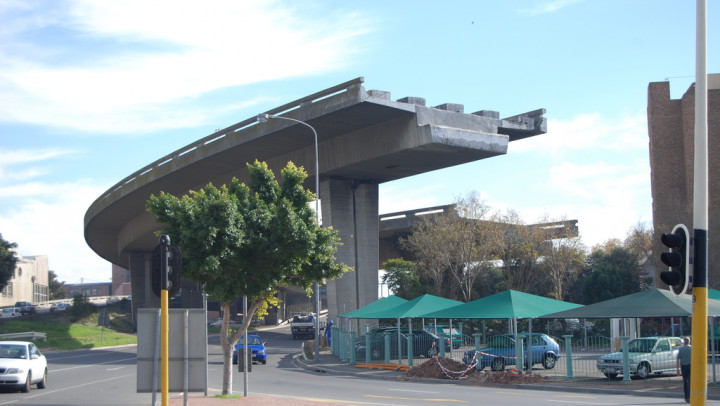 Yesterday the City of Cape Town unveiled the six proposals it had received from the private sector for the development of the Foreshore Freeway Precinct in the city centre. The area under and between the existing and famous “unfinished” freeway overpasses includes a huge strip of wasted City-owned land. Six hectares in size, it’s the focus of Cape Town’s first transit-oriented development (TOD) project.

The proposals for this land had to address the CBD’s traffic congestion as well as Cape Town’s affordable housing needs. Says Councillor Brett Herron, the City’s mayco member for the Transport and Urban Development Authority: “The development of the Foreshore Freeway Precinct will be on a scale never seen before in Cape Town. We expect it to resolve some of the challenges that are currently preventing us from realising the city’s full potential – the lack of mobility being key.”

A few of the proposals envision joining the “unfinished” sections of the freeways. Others are bolder, advocating for demolition of the entire elevated roadway and focusing on new arteries at grade. Says our Board member Dr Lisa Kane, whose PhD focused on the long history of Foreshore development plans: “Visions of a more human-focused and integrated city have been unleashed by Cape Town’s professionals. These are visions which Cape Town is thirsty for. They will be difficult to contain.” All of the plans make provision for affordable housing in the CBD, and most for public squares and green spaces. Sports facilities, bike ways and an elevated urban park, like the New York High Line, are also among the ideas.

The proposals transform the Foreshore as we know it. The models and artists’ impressions are incredibly detailed, and we recommend you take a look. They will transport you to a new people-friendly future of Cape Town.

With these development proposals now open for public viewing and comment at the Civic Centre, Capetonians have the opportunity to make their mark on the city in a big way. The City’s Bid Evaluation Committee will, after the conclusion of the viewing period on 21 March, take the public’s comments into account as part of the evaluation process that will result in the selection of a preferred bidder or bidders.

The Foreshore freeways have, for the past 40 years, served as an ironic monument to Cape Town’s love affair with the car. Now they represent a turning point in spatial planning in the Mother City. This initiative is one of the five TOD projects the City has identified to locate economic and residential development closer to transport corridors. Says executive mayor Patricia de Lille: “The TOD strategic framework will reverse the legacy of apartheid spatial planning and redress the injustices of the past by stopping long travelling distances and urban sprawl.”

The next four TOD projects focus on Paardevlei, Athlone, Bellville and Philippi.

We urge you to have your say by emailing tct.foreshore@capetown.gov.za