Informal transport and trade fulfil important roles in society. Municipalities should, therefore, include these sectors in the planning of cities. 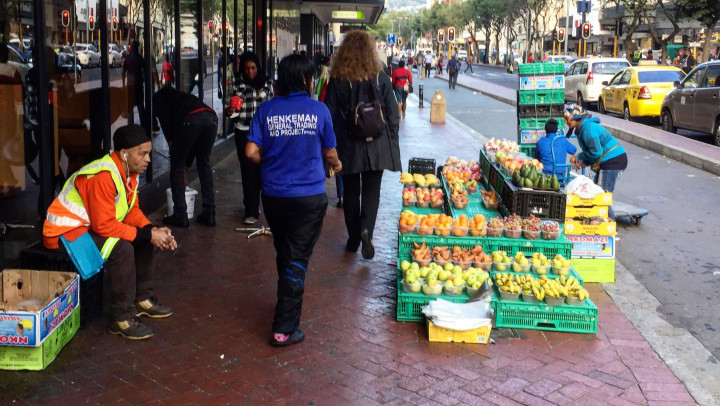 Street vendors give citizens easy access to a wide range of goods and services in public spaces. This makes them an invaluable sector in urban economies around the world. And Cape Town is no different. According to the Economic Performance Indicators for Cape Town (EPIC) report for the fourth quarter of 2016, 165 438 people make a living in the Mother City’s informal sector. They sell everything from fresh vegetables to fast food, and cosmetics to crafts.

Nine hundred of these traders set up on sidewalks and squares in the CBD, and they are well patronised. The 2014 edition of The State of Cape Town Central City Report states that 73.4% of people who pass through the area buy from them.

There is clearly a demand for informal trade in Cape Town. However, the contestation of public space remains a hot topic. You could say the same for the informal transport sector, which moves much of the population but frequently draws the ire of motorists and other road users.

According to WhereIsMyTransport, which recently mapped Cape Town’s minibus taxi network: “Informally run transport accounts for up to 80% of public transport passenger trips in medium-sized cities across the emerging world [...] There are over 7 500 licensed taxis in [Cape Town], accounting for 15% of all trips taken in the city, more than any other public transport mode besides walking.”

The City of Cape Town’s Transport and Urban Development Authority (TDA) initially wanted to phase minibus taxis out as part of its MyCiTi rollout. However, it has since acknowledged the importance of informally run, unscheduled transport as part of an integrated system. Councillor Brett Herron, the Mayco member for TDA, has said: “Simply put, the City has come to the realisation that going forward, we need to consider a hybrid model where minibus-taxis may complement or replace the MyCiTi buses on certain feeder routes.”

A similar hybrid model could benefit the informal trade sector. Despite the law of supply and demand, municipal management of street trade around the world has been restrictive. In a presentation to City of Johannesburg’s Department of Economic Development in 2014, Wits University’s Centre for Urbanism & Built Environment Studies stated that this “damages livelihoods” and “illegalises poverty”.

The presentation looks at India’s Street Vendors (Protection of Livelihood and Regulation of Street Vending) Act, 2014 as an example of best practice. The act acknowledges the concept of “natural markets” and that street traders need to be where business is. It recognises that spaces where “sellers and buyers have traditionally congregated for the sale and purchase of products or services” require management rather than the removal of traders.

In Cape Town, the informal sector employs 11.2% of the total workforce. The City would do well to bolster this sector, protecting livelihoods and a major economic driver.