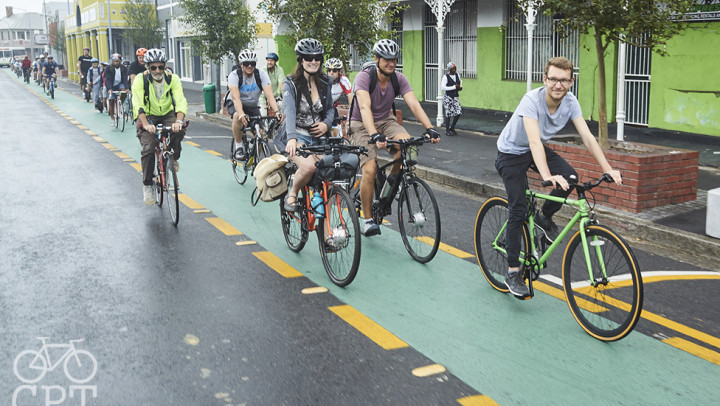 The document notes that although recreational cycling is popular in Cape Town, the rate of so-called “utility” cycling is low. In fact, only 1% of commuter trips are by bicycle. TDA wants to increase this to 8% by 2030 in its efforts to reduce traffic congestion and greenhouse gas emissions. As we know, transport accounts for 27% of the city’s emissions, with single-occupancy car use being the biggest contributor.

As stated in Open Streets Cape Town’s (OSCT) policy brief published on 24 January, there are many reasons people rely on their cars. One of these is where we live in relation to work. It’s heartening, therefore, that the City’s draft Cycling Strategy identifies local commuter trips between 10km and 15km as a growth area for cycling. The other is feeder trips to public transport services. An increase in cyclists in both these areas would have a huge positive impact on peak traffic.

However, as yet, the conditions for cycling aren’t all that good. TDA is focusing on five areas to address this. It aims to:

The draft Cycling Strategy also envisions a school programme to instil a culture of commuter cycling at a young age, and includes a proposal for a bicycle manufacturing plant in the mother city.

Open Streets Cape Town welcomes TDA’s vision “to make Cape Town the premier cycling city in South Africa, where cycling is an accepted, accessible and popular mode of transport for all – residents and visitors alike.” We echo Councillor Herron’s request for residents and the cycling fraternity to get involved in the conversation around cycling in the city.

He says: “We all have to work together to create a more liveable city that is sustainable in terms of protecting our natural environment and where it is relatively easy to move from A to B. As with other forward-thinking cities around the world, it is also our intention to gradually transform Cape Town from a vehicle-centred city to a people-centred city that is conducive to alternative modes of transport such as walking and cycling.”

In our policy brief, we stated that cycling has many benefits. We urge you to bear these in mind when you submit your comments on the City’s draft Cycling Strategy. Cycling:

Have your say: submit your comments before 21 February 2017.