Popular decades ago, it turns out ride sharing is the greener and more sociable travel option we need today. 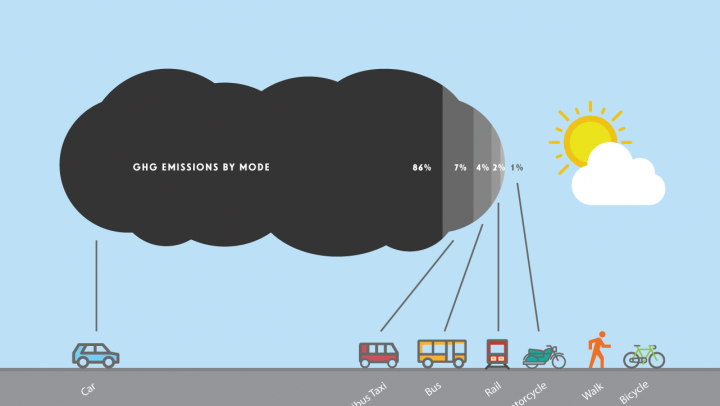 An iconic urban thinker of our time, Jane Jacobs, believed cities are about providing a “multiplicity of choice” to residents: choice in where we live, work and play. Integral to making these choices are the spatial nature of a city and the array of mobility options it offers; i.e. a variety of private, public and non-motorised transport. At the same time, climate change science is telling us to base our individual choices on the environmental, economic and social impacts they may have.

The City of Cape Town’s latest household statistics (2014) revealed single occupancy vehicles are the biggest culprits when it comes to greenhouse gas emissions within the transport sector. Cape Town is also the 48th most congested city among 390 cities, according to the latest TomTom Traffic Index.

Commuting solo by car does not seem to be such a wise choice anymore.

The City has made significant inroads towards transitioning to a low-carbon transport system in the medium to long term, having introduced significant infrastructural, operational and institutional changes in the last decade. But citizens have a part to play too. According to the Partnership on Sustainable, Low Carbon Transport (SloCaT), carpooling as a private transport choice is low-hanging fruit in the quest for sustainable transportation.

Carpooling and ridesharing might not be unfamiliar concepts to Capetonians, as the fundamental concept of sharing a journey with someone is not new at all. In fact, it is very likely the majority of us have done it before, be it lifting a neighbour’s kid to school or hitching a ride to an out-of-town concert. Sometimes we make a monetary contribution to the cost of the journey. Other times the arrangement consists of an accumulation of brownie points or a polite thank you.

A recent study by Nelson Chan and Susan Shaheen place the origin of carpooling in the US during World War II, when the government introduced car-sharing clubs as a policy regulation in an attempt to reserve fuel for war efforts. In days of old, good old noticeboards matched drivers and passengers. Today, technology has made it so much easier.

Globally, mobility in general is undergoing a rapid transformation aided by new technology in car design (electric and autonomous cars) and advances in ICT, GPS, the internet, smartphones and social media, with recent predictions pointing to a complete new way of viewing car ownership. In the case of carpooling, the principle of matching drivers with riders has not changed. These technological advances have, however, changed how this matching takes place, so much so that ridesharing platforms (website or mobile applications) are becoming a common phenomenon in most cities.

Chan and Shaheen’s study classifes the types of ridesharing available in cities into three broad categories: acquaintance based, organisation based and those functioning on an ad-hoc basis.

Four prominent organisation-based carpooling options are currently available in South Africa. FindALift is an established internet-based platform that has been around for almost 10 years and boasts a nationwide membership of more than 14 000. JumpIn Rides is the newcomer in the SA carpooling space. It offers a web-based platform with a focus on medium- to long-distance travel. CarTrip, largely based on the French BlaBlaCar model, has been around for a while longer, offering the added benefit of an accompanying smartphone app (Android and iOS). uGoMyWay, with its catchy brand appeal, offers its service only via a smartphone app (Android and iOS). Accelerate Cape Town recently partnered with uGoMyWay in launching a carpool pilot among their corporate members to support behavioural change.

We must not confuse carpooling with traditional for-profit metered taxis or other car-hailing services such as Uber. The financial focus is different in that carpooling is not intended to result in financial gain for the driver. Rather, the driver’s cost is partially shared for that particular trip. It is important to note that once a driver is making a profit from lifting others, an operating license for the vehicle and a professional driving permit for the driver become requirements in terms of South African law, as outlined on the City website. This link also contains important safety tips to consider when becoming part of a carpooling club.

Many experts have argued the far-reaching environmental, economic and societal benefits of carpooling, premised on the insight that carpooling results in fewer cars on the road. This in itself can lower emissions levels, maximise energy efficiency, relieve traffic congestion and decrease the demand for parking space in cities. The Open Streets policy brief What do we mean by low-carbon transport? shows that a 10% reduction of CO2 emissions from transport is obtainable by merely increasing car occupancy from the current 1,4 average people to 1,56 people.

Furthermore, a recent study done on BlaBlaCar, which operates across Europe with over 20 million active users, has shown that ridesharing can have unintended societal benefits. The researchers found younger and more educated people use BlaBlaCar when compared to the French national average. And the drivers in the system tend to have higher incomes than the passengers, which could have “equity balancing” effects.

Other, palpable benefits on a personal level include sharing the cost of travel for a particular trip, and flexibility in route and time. Some workplaces also incentivise ride-sharing schemes for staff.

So, we urge you to do a little experiment with one of the many carpooling options that are on offer in Cape Town. Sign up and log a trip, or decide with a group of friends or co-workers to back one company, with the knowledge that critical mass will improve your chances of a great match on any of these platforms. Before you know it, you have made an arrangement which covers some of your costs. And it turns out that your passenger knows so-and-so – and loves to Carpool Karaoke too.