Reflecting on Open Streets' successes and lessons, and the role of the programme in the future of Cape Town. 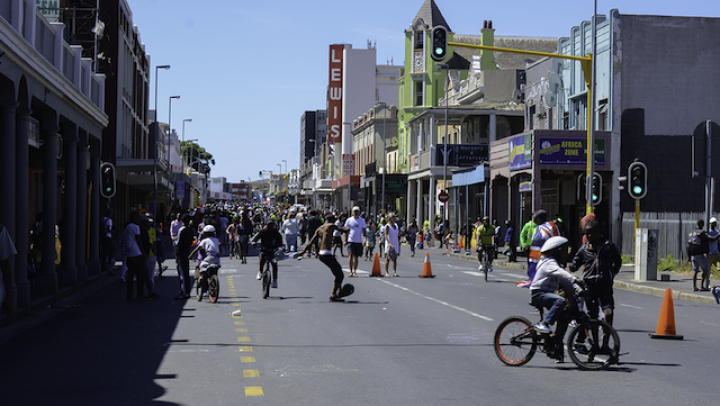 King Langalibalele Drive in Langa and Bree Street in the Cape Town CBD have something in common: they have become Open Streets several times in the past five years. Residents who were at these car-free days remember them fondly. They got the chance to experience the untapped potential of streets as public space.

This is something that residents of Latin American cities know well. They have Ciclovía, a permanent mega-programme that reserves a network of streets for people to run, cycle, skate and explore their cities and towns in a car-free environment on a weekly basis.

Ciclovía inspired the creation of “Open Streets” programmes around the world.

In Cape Town, it started with local government testing the idea in 2003 – remember Klipfontein Road Car-Free Day? A decade later, a group of residents asked themselves: how can we establish Ciclovía here? Momentum gathered, and soon others joined a collective pursuit of this idea. In October 2012, the City of Cape Town tested the idea again, this time on Victoria Road in Grassy Park as part of Transport Month. In May 2013, the first citizen-organised Open Streets Day in Cape Town took place on Lower Main Road in Observatory.

It has now been five years since that day when thousands of adults and children took over the street to play, connect and experience the space differently. And, over the course of 15 Open Streets Days spread across various parts of Cape Town, we’ve seen the initiative grow into a movement of people actively reimagining their streets and connecting with each other across deeply entrenched social and spatial divides.

At this point in the journey, we celebrate while grappling with some big questions:

What does an Open Streets programme look like in Cape Town? What could its legacy be? How does it remain relevant in light of other pressing social issues?

What does an Open Streets programme look like in Cape Town?

While the original vision was of a Ciclovía-type network of car-free streets on major arteries, we have our own context in which to shape the programme. The idea has manifested in local communities in a variety of ways, influenced by Cape Town’s unique relationship with public space, the recreational activities we enjoy and the regulatory constraints of local government.

The pervasiveness of apartheid’s fragmented city planning makes it hard to create road closures. Nevertheless, and without fail, once we have created the car-free platform, people use the space to play games and sports, and fill the street with activities. In some areas, the economic opportunities of trading and small business development are the biggest draw card. Above all, people celebrate the opportunity to connect with each other and feel part of creating communities that care for everyone.

We have not yet established what format can best suit Cape Town’s reality. We have tested short road closures in places such Langa and Bree Street. And although the response has been equally positive in both instances, it is clear you can’t compare the impact, given the very different socioeconomic worlds these two communities represent.

Last year, we took a leap of faith and closed down 5km of Main Road (the M4) to connect Observatory and the city centre. The intention was to test a model that more closely resembled Ciclovía, with less activities and more space for walking, cycling and skating. While some people complained it was too long and spread out, others reveled in the transformation of the streetscape and the opportunities it presented to move around. Given the mixed responses, we are testing the same format again this year, incorporating the lessons learned the first time round.

It has become apparent that short, concentrated Open Streets Days generate a level of energy and activity that is not possible on longer stretches. At the same time, it’s not possible to experience mobility and a real sense of an alternative in limited space.

And so we collect public feedback while engaging with government officials and partners to establish what the variables are that might truly change people’s mindsets and behaviour. At the core of our dilemma is time frames. While we are aware that short-term gains often don’t determine the success at the end, we are also conscious of the importance of public support and the need to have people on board. We can’t afford losing the energy that till now has ensured this programme stays in people’s minds and hearts.

What legacy could Open Streets have in Cape Town?

In the past five years, we have come to understand that the shape of the programme – and, therefore, its legacy – is not up to government, private sector or neighborhoods alone. It is the result of collective discussions and, most importantly, of communal actions and experiences.

We have seen in other Open Streets programmes across the world that each city lends its unique flavor to proceedings.

While Los Angeles focuses on attracting thousands of cyclists to show the power of a major artery without “normal” traffic, in Indian cities the concept follows the aim of providing equitable “streets for all” (given the context of a high level of inequality). In Nairobi, the focus seems to be on the creation of living streets and vibrant public space.

In Cape Town we are working to determine where we should place our focus so that the programme can contribute to the creation of a city that resembles the dreams and expectations of all Capetonians.

In seeking to consolidate a strategy for the Open Streets programme to have real impact, we have been working with local government and other local groups. But we clearly still have a lot to improve to achieve the potential of these partnerships.

When we think of impact, we oscillate between, on one hand, the power of experiencing streets where cycling and walking are possible and desirable and, on the other, the opportunity to help weave the type of social fabric that can withstand the passing of time, environmental crises such as the ongoing drought, and the breakdown in human relations (which seems to have a global scope).

How does Open Streets remain relevant in light of other pressing social issues?

And so, going forward, one of our biggest questions is how we maintain relevance in light of the myriad of challenges facing our city. Although there is no single answer to this question, we believe there is a real opportunity to use Open Streets as a platform to energise communities, while in turn using that momentum to grow and nourish the programme. When we organise an Open Streets Day, a great level of energy goes into convening people in the area. Thus far, that has resulted in a high level of support, but once the day is over, the energy quickly dissipates.

We have engaged our partners and supporters to try to shed light on this and to find ways of creating the type of mechanisms that will ensure not just relevance but increased citizen ownership so that the programme can continue to grow organically. Our most recent attempt took the form of an Open Streets Indaba, where we discussed plans for the year and invited others to help us imagine what that future could hold.

As we look ahead, we are interested to identify some of the simple steps we can take to build on that energy and to use the resulting platform to address other issues. Open Streets is of, course, only one piece of a large and complex puzzle that is our city, Cape Town.