Open Streets Mitchells Plain “sequel” will be bigger and better

On 2 April, 2017 a portion of Eisleben Road becomes Open Streets 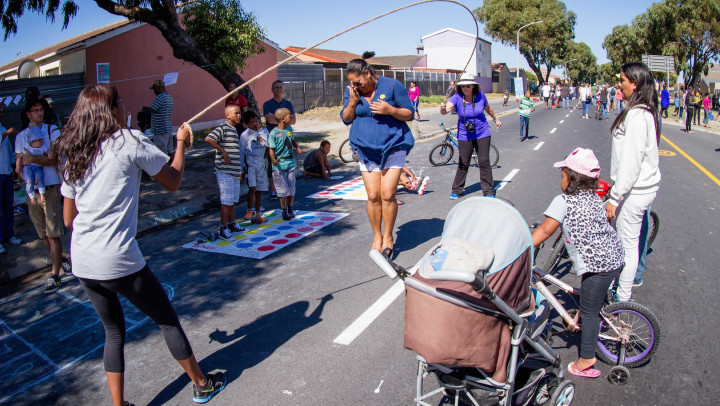 On 2 April, Open Streets Cape Town returns to Mitchells Plain – almost a year to the day since the first time on Merrydale Avenue. This year, we will be staging an Open Streets Day on Eisleben Road between Wespoort Drive and Spine Road, and everyone is welcome.

If you weren’t there last year – or if you’ve never been to an Open Streets Day before – you may be wondering what it’s all about. The concept is simple: we remove cars from a busy road for a few hours, creating a temporary public space that puts people first. You can use this space to walk, cycle, skate, skip, dance or play with no fear of cars.

Eisleben Road was chosen for this year’s Open Streets Mitchells Plain primarily because local residents and stakeholders requested it. It also aligns with our agenda to “shock the system” by closing a major artery to vehicular traffic. Furthermore, it connects with Spine Road, which forms an important link with Khayelitsha.

Free movement facilitates connectivity, on a literal level and a philosophical one. We look forward to seeing what people do on the day and how they interact with each other. Many a friendship has formed on the asphalt at Open Streets Days!

Due in part to the extensive community engagement that goes into planning an Open Streets Day, each one reflects the personality of the area it’s staged in. Last year’s Open Streets Mitchells Plain was no exception. The Mitchells Plain Crusaders Christmas Band set the tone when they marched down Merrydale Avenue. The street then filled with one of the biggest turnouts we’ve ever had, and the usually busy stretch became a playground with cricket, football and basketball, among many other activities. Mitchells Plain’s vibrant street art scene was also on display as the likes of Prefix66 showcased their talents. And, of course, the smell of local flavours – including samoosas and akni – filled the air.

Check out this short video to get a feel of what’s in store this year, and stay tuned as we announce activities closer to the date.

Open Streets Mitchells Plain 2017 also marks the end of our summer programme, which started in Langa on 30 October 2016. Bellville followed on 20 November and Bree Street on 15 January. It will be a bittersweet conclusion to a wonderful few months in which we’ve taken our flagship programme to new heights. We thank the City of Cape Town’s Transport & Urban Development Authority for its commitment to bring Open Streets Days to more communities in the near future.

Open Streets Days are all about family and friends, and we encourage you to bring yours to Mitchells Plain on 2 April. If you are a community member and would like to get involved, start by joining our Q&A session this Thursday evening at Rocklands High School. It’s at 18h00 sharp.