Don the Mime remember him from Open Streets?

Here's the inspiring story of the character who, at the last two Open Streets days, surprised and made kids and grown ups smile in his own words. 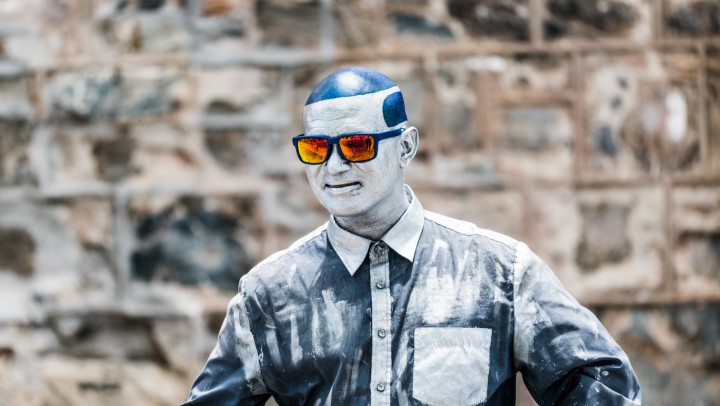 I was born Donovan Anthony Philander on March 4th 1968 in Deep River, Wynberg and grew up in Manenberg and Mitchell's Plain. Amateur school drama and sport played a huge role in my young life.

Having been born into a musical family and growing up during the famous years of the late Michael Jackson and every other 80's recording artist, actor and dancer I auditioned at the V&A Waterfront Theatre Company in 1991 and studied dance and drama. In 1993 I got offered a role in the controversial hit musical production; Jesus Christ Superstar.

The Musical Camelot landed me the opportunity to play a Knight at the round table in 1994 and in the same year I successfully auditioned for Cape Town's first major musical extravaganza called Follies Panache. I then received a call-back and landed my fourth Professional Theatrical experience and it all took place at the then so-named The Nico Malan Opera Theatre, now known as the Arts Cape Theatre.

A break in film and back into theatre by 1998 got me a six month contract in an energetic musical called Banned. By the time we hit the Millenium, it was inevitable that this was only just the beginning!

Cantina Tequila was a 3 night latino/ Spanish performance at the Barnyard Theatre in Wit Rivier, Nelspruit. Good Vibrations took place at the Langoustine Theatre by the Sea and The Guitar that Rocked the World was held at the Elizabeth Sneddon Theatre.

Thereafter, I started concentrating more on dance choreography, event managing, directing musicals + variety concerts, etc. When I returned to the Western Cape after a six year stretch in Durban, I continued with choreography and directing especially in Mitchell' s Plein. I also started doing street mime acting and worked at the Kalk Bay Harbour, The V&A Waterfront and now Cavendish, Claremont.

I have recently been honoured to perform street mime at the Gardens Night Market in December 2014, Open Streets on Bree Str. and Langa respectively, The Community Chest Carnival in Maynardville Wynberg and The Cape Town Carnival on Somerset Road, Green Point.

We look forward to having Don at our next Open Streets day!