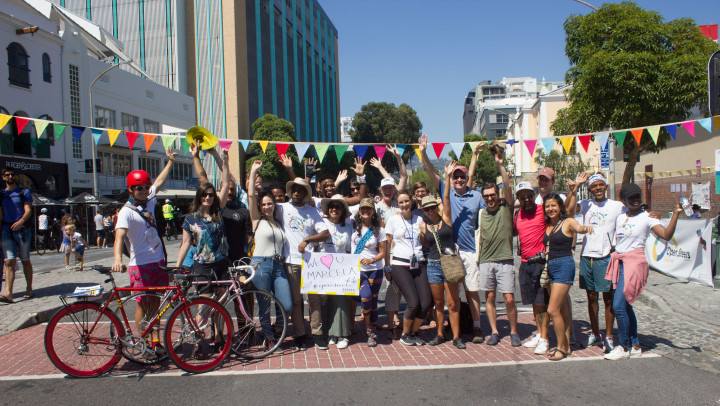 I arrived at Open Streets Cape Town (the organisation) about two weeks before Open Streets City Centre and dropped right into the middle of the action. I watched my colleagues work relentlessly to make sure the day went off with as few hitches as possible; I think the goal was accomplished!

The best way to describe my first Open Streets Day is a great, big hug. It sounds a bit like the answer of a three year old, but it’s a reflection of the childlike joy I experienced. I felt embraced from the moment we set up the info booth until the time I left. Embraced by real hugs of, course, but also by the smiles and laughter of the volunteers, community members and animal friends that came out to use the space however they wished. Seeing people safely transport down the street was very rewarding. It made me want to dust off my roller-skating skills. There were some folks who I had only met once at volunteer orientation who treated me like their daughter, cousin, sister, or long-time friend. Volunteer orientation is the meeting we hold to brief all volunteers a week or so before an Open Streets Day.

What amazed me about Open Streets is that people of all ages made the time to volunteer. In my experience in the United States, we kind of naturally separate ourselves by generation. It’s just a confirmation that Open Streets has made it clear that streets affect everyone, and everyone has bought into the vision. All volunteers were equipped and ready for ANYTHING. I have never been a part of such a smooth group of helpers.

Open Streets has different volunteer jobs for people to participate in. I was a part of the logistics team at City Centre. However, I ended up with a different job for a portion of the day: babysitting! Mzi’s (Open Streets Operations Assistant) daughter, Khethokuhle, and I had a great time under the info booth playing chess while her parents were out surveying and carrying out various tasks. She is so adorable and sassy. I’m definitely looking forward to seeing her at Open Streets Langa.

I haven’t had the opportunity to interact with Marcela (Open Streets’ previous Managing Director) much, as I came at the end of her transitioning period, but seeing the way the community reacted to the opening ceremony made my heart blossom. It was as if I grieved a bit for my opportunity to experience Marcela’s magic, but I have a feeling I will feel much of her energy vicariously through the Dream Team (Mzi, Danica, Sindile and Rebecca). The presentation of the farewell gifts, Mzi’s performance, and Marcela’s words moved us all and confirmed what Open Streets is all about. It’s quite inspiring how a vision by a group of passionate people became a movement that is growing and expanding. It’s a testament to what happens when you commit to your dreams and follow through. It certainly made me want to act on my dreams sooner than later.

My excitement for Open Streets Langa is overflowing. I know each location has a different energy, so I’m looking forward to experiencing the differences between the City Centre to Langa. I’m anticipating more hugs and new people to meet, some good philosophical chats with Siya (Volunteer Section Leader) and more babysitting. I also hope to have a pair of roller skates to reimagine my way of transportation (inspired by the Cape Town Roller Girls). I think Marcela said it best: there is nothing like a Cape Town Open Streets Day. I have never experienced joy and a reimagining of space like on Sunday. I’m happy to be a part of the movement for safer and sustainable streets.

Dayonna Tucker is a communications Intern here at Open Streets while studying abroad for the quarter. She is from Harvey, Illinois, USA, a city south of Chicago, and attends Stanford University in California where she majors in African and African American Studies with a minor in Creative Writing. She is also a creative artist of many trades, but particularly enjoys clothing construction. 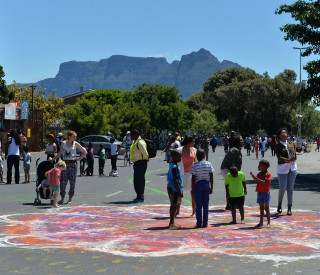